I watch with abated breath the Growth of China’s voracious Growth Appetide!

After Deng Xiopeng opened up Shenzhen China became an export powerhouse. Even USA now tries to reign in China’s relently export to the US

I saw for the First Time in Booming Iskandar how China’s Country Garden launched for sale of 9,000 Condo Apts at one go.

PROTON X70 (GEELY BOYUE IS A RUNAWAY SUCCESS IN CHINA.

SINGAPORE (June 4): On Feb 23, Daimler announced in a filing that Zhejiang Geely Holding Group had acquired a 9.7% stake in Daimler for €7.3 billion ($11.4 billion). With this stake, Geely becomes the single-largest shareholder of Daimler, whose most famous marque is Mercedes-Benz. Geely also owns another well-known European brand — Volvo — and former British brand Lotus (see Chart 1).

In just 20 years, Geely has transformed from a little-known Chinese company to one of the most recognised names in the automobile sector. Geely is already one of the largest producers of electric vehicles (EVs), ahead of Tesla, and is snapping at the heels of the likes of Renault-Nissan-Mitsubishi and BYD Corp.

Geely became a global name when it acquired Volvo in 2014. In 2017, it took a 49.9% stake in Proton, Malaysia’s national car, and became a well-known brand in Malaysia. Geely injected RM170 million of cash into Proton and also RM290 million worth of the Geely Boyue SUV platform. The Boyue SUV is China’s top-selling sport utility vehicle and the platform will be used to build Proton’s first SUV in Malaysia.

Yet, what is Geely’s business model? How can it own a mass-produced value-for-money carmaker such as Proton as well as acquire a considerable stake in Daimler? On the surface, Geely and Mercedes could not be more different in their product line-up and brand representation.

Geely started off as a manufacturer of refrigerators. Subsequently, it diversified into motorcycle production. The transition to car production was a natural progression. Li Shufu, Geely’s founder, is largely credited with the brand’s rise and fame. Li personifies the Chinese dream. Born into a peasant family, he is on Forbes’ list of top 10 richest Chinese; and he is a leading proponent of EVs and China’s electric mobility push. 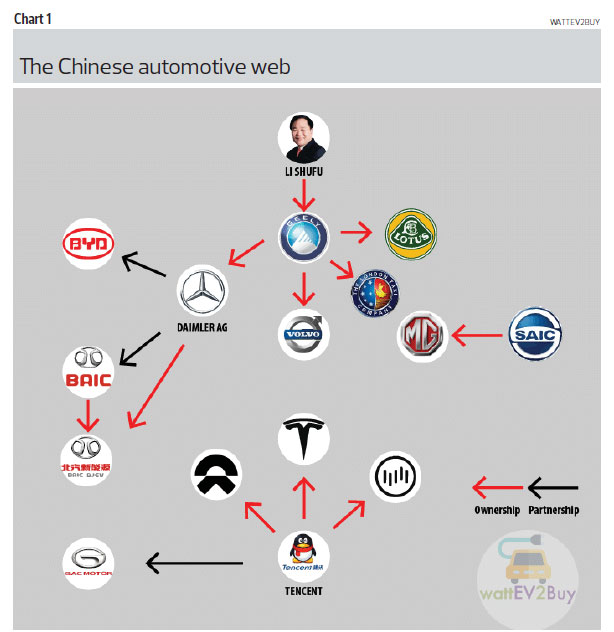 In 2010, Volvo was owned by Ford Motor Co, which weathered the global financial crisis without taking financial assistance from TARP, or the Troubled Asset Relief Program, or declaring bankruptcy. Still, Ford had financial challenges that were exacerbated by the US’ unsuccessful car subsidy programme.

So, Ford divested a few brands — Jaguar Land Rover to India’s Tata Group, and Volvo to Geely, which acquired it for US$1.8 billion.

Geely’s Li was the highest bidder for Volvo. At the time, industry experts had little faith in Volvo’s turnaround. For one thing, Geely’s sales were lower than Volvo’s. The market was also concerned about financing.

In a rather lengthy op-ed titled “Devolving Volvo”, The Economist expressed scepticism. “Although Volvo represents only a small part of Ford’s output, swallowing it will be a big challenge for Geely: [In 2009] it sold just 330,000 cars — most of them in China — which is about the same as Volvo sold worldwide. Unlike most big Chinese carmakers, Geely is privately owned and, in recent weeks there had been some doubts about whether it would get the financing needed for the purchase. However, those doubts were dispelled when Chinese state banks (and hence, it is assumed, the government in Beijing) said they would back it,” it stated in May 2010.

GEELY DID A GREAT JOB TURNING AROUND VOLVO.

NOW GEELY IS TURNING PROTON AROUND.

BUT IS IT ONLY FOR MALAYSIA?

GEELY CHINA IS LOOKING NOT JUST AT MALAYSIA – BUT FOR THE ENTIRE 620 MILLION STRONG ASEAN 10 MARKET FOR ITS EXPANSION!!

Already a Great Success In Malaysia. Proton has ended the first quarter of 2019 on a high, with 6,145 vehicles registered in March alone, representing a market share or 11%, which is a 2.6% improvement over the same month in 2018. For comparison’s sake, the national carmaker sold 5,283 units in February, and 7,007 cars in January.

What’s more, Proton recorded a 46.1% increase in vehicle registrations in March (vs March 2018), which it says is equivalent to a growth rate nearly four times higher than the industry as a whole. Compared to the first three months of 2018, Proton’s cumulative sales figure for Q1 2019 increased by 43.5%, while the TIV only grew by 6.7%. Proton claims that this puts it ahead of all its rival brands in terms of growth, along with a sizeable lead over the fourth best-selling automotive brand in Malaysia (Toyota).

Proton CEO, Dr Li Chunrong said, “the numbers posted by Proton in 2019 is the direct result of hard work put in at every level of the company. These achievements are possible due to the growth in the number of 3S/4S outlets, an increase in product quality, refocusing on customer service and improvements in many other areas. With the forthcoming launch of our updated models later this year, Proton is confident its investment in the business will continue to benefit sales growth.”

In no uncertain term GEELY ALREADY STATED THIS

“We also aim to unleash the full potential of Lotus Cars and bring it into a new phase of development by expanding and accelerating the rolling out of new products and technologies.”

Analysts said the agreement should allow Proton to ship vehicles tax-free across the Association of Southeast Asian Nations (Asean) bloc, which covers a population of 623 million.

So the ECRL will connect Proton City to Serendah and from there it goes west to Port Klang for its Car Shipment to Myanmar, West Thailand & West Indonesia. It also moves east on the ECRL to both Kuantan Port & Tok Bali port for its exports to Vietnam, Cambodia, Laos, East Thailand, Sabah, Sarawak, Brunei, the Phillines & Indonesia = a Total of 623 MILLION STRONG MARKET FOR PROTON – GEELY

From Wikipedia, the free encyclopedia

Proton City (tagged as “City of the Future”) is a township with industrial, commercial and residential activities spread over 4,000 acres (16 km²) in Muallim District, Perak, Malaysia. It houses the RM1.8 billion Proton car assembly plant.

To be fully developed by 2020, Proton City aims to be home to Malaysia’s automobile industry. Undertaken by Proton City Development Corp Sdn Bhd, a joint venture between DRB-Hicom Bhd and Proton Bhd, itself a core member of Proton Holdings Bhd, it started in 1996 with an initial investment of RM2.5 billion, beginning with the construction of the Proton plant. The Proton plant has a workforce of more than 2,000 and most of them are expected to live in the area. When Proton City is fully developed, it would have a population of about 240,000.

The first settlement in the area – 252 units of apartments – have been handed over to the buyers. These apartments have common facilities that include car and motorcycle parking bays, children’s playground, BBQ area, car wash areas, mosque and a nursery/kindergarten on the ground floor of each block and a multipurpose hall. Parcels 19 and 20 when completed in 2007 will have 1,091 apartments, 336 units of single- and double-storey terrace houses, 86 semi-detached houses, 37 bungalows and 36 shop-offices.

Proton City is also expected to be home to students and staff of the Sultan Idris Education University (UPSI), which a few years ago was known as Sultan Idris Teachers’ College, one of the country’s oldest teachers’ training institutions. UPSI, occupying 800 acres (3.2 km²) within Proton City, is expected to have a student population of 20,000 within four years.

The next phase of development at Proton City is the industrial component, which will see the construction of 81 factory lots for the national car’s vendors. Other public amenities such as schools, mosque, park, recreational club and man-made wetlands of 24 acres (97,000 m²) with a large lake, water storage towers, air quality control station, fire station and power station will also be built in the coming months.

Modern technology will be put to full use, with a command centre that will monitor all smart home systems. There will be intelligent traffic control, telemedicine, e-commerce and other “k-society” amenities and services integrated into living within Proton City.

The next phase of development at Proton City is the industrial component, which will see the construction of 81 factory lots for the national car’s vendors

NEXT WILL BE CONSTRUCTION OF 81 FACTORY LOTS FOR THE NATIONAL VENDORS!!

Scroll down to properties owned

The advanced RM1.8 billion (USD$580 million) Proton Tanjung Malim manufacturing plant in the Malaysian state of Perak commenced operation in November 2003.[23] The new plant had been projected to open in August 1998, but it was deferred due to the 1997 Asian Financial Crisis.[24] However, it was revived in 2001 and completed in late 2003 instead.[25][26] The new 1,280 acre plant was also developed as part of the Proton City project, which would span 4,000 acres of land in Tanjung Malim and consist of residential, commercial, institutional, industrial and recreational areas.[27] The plant has an annual production capacity of 150,000 vehicles, but could be expanded to 1 million units in the future. The Proton Tanjung Malim plant complements the original Proton plant in operation since 1985, located in Shah Alam, Selangor.[28] Despite a combined production capacity of around 350,000 units, both plants are underutilised with just 52,235 and 114,645 units produced at the Tanjung Malim and Shah Alam plants in 2011 respectively.[27

And these are the facts & figures

It is for a) Residential Commercial/ b) Industry c) Agriculture

BEST OF ALL IS ITS SUPERB LOCATION!

What is the meaning of adjoining?