BJ ASSETS AS REPORTED BY EDGEDAILY (Additional comments by Calvin ) 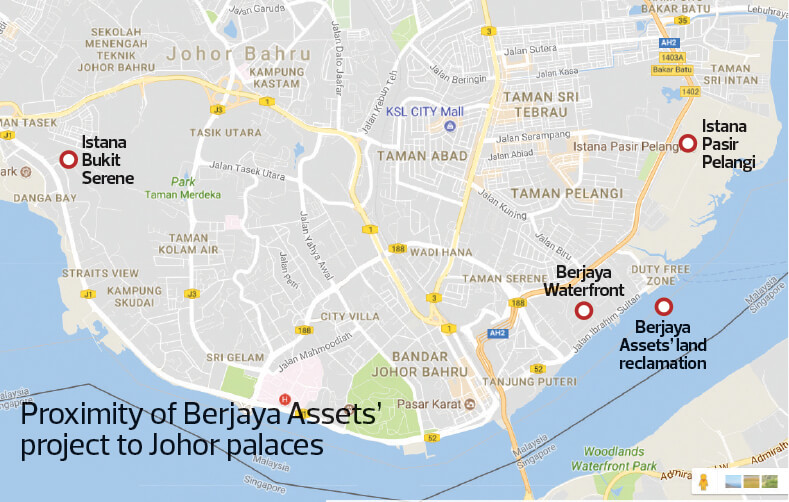 LOOK CLOSER AT THE PICTURE. THE DUTY FREE ZONE IS ONLY HALF THE DISTANCE TO SINGAPORE  LANDMASS COMPARED TO THE JB CAUSEWAY

SULTAN of Johor Sultan Ibrahim Sultan Iskandar, who is expected to emerge as a substantial shareholder in Berjaya Assets Bhd (BAssets), is said to be interested in the group’s land reclamation project near the Johor Strait, according to sources.

It is worth noting that loss-making BAssets has the right to reclaim 55 acres adjacent to Berjaya Waterfront in Johor, which will enhance the value of the development.

The group has successfully refurbished the property for less than RM20 million after acquiring it from duty-free operator Atlan Holdings Bhd for RM325 million in 2012.

“The Sultan of Johor is keen to take a substantial stake in BAssets as the land reclamation project is near his palace and, of course, the development is taking place in his state,” a source tells The Edge.

A check on Google Map shows that Berjaya Waterfront is only a four-minute drive or 2.4km from Istana Pasir Pelangi and a 14-minute drive or 9.5km from the majestic Istana Bukit Serene.

Istana Pasir Pelangi is the home of the Crown Prince of Johor and his family while Istana Bukit Serene is the official residence of the Johor ruler.

It is learnt that he bought the shares at RM1 apiece, representing a 14.5% discount to the counter’s closing price of RM1.17 on that day.

Sources also say Sultan Ibrahim is likely to continue mopping up BAssets shares to at least a double-digit percentage stake.

At press time, the ruler’s total shareholding in BAssets was still unknown.

As required by the Companies Act 2016, a substantial shareholder must notify a company of any change in his or her shareholding within seven days.

BAssets also has a licence agreement with Greyhound Café Co Ltd to set up and operate cafés under the latter’s trademark in Malaysia.

It is worth noting that Berjaya Waterfront’s duty-free zone has 35,000 sq m of retail space as well as a hotel, which has a convention centre and business-class rooms. The duty-free zone also includes a ferry terminal that is used by passengers from Indonesia’s Batam and Bintan islands.

“Berjaya Waterfront is already located in the country’s southernmost city and is minutes away from the main causeway link to Singapore. With the land reclamation, it is literally the nearest [point on] Malaysian territory to Singapore … edge to edge,” says another source.

No firm decision has been made so far, but BAssets is likely to appoint CCCC as it offers the best package, says a source.

BAssets executive director Koh Huey Min was reported as saying in August that the environmental impact assessment on the land reclamation project has been secured and the group is in the process of submitting the environment management plan and seeking planning approval.

She added that the reclamation can only start next year as approval will only be obtained in three to six months.

The group estimates a reclamation cost of less than RM200 psf, significantly lower than the highest recorded transaction price of RM800 psf for the area.

“And this is only looking at the value of the land. We have earmarked it for a mixed-use development, comprising hotels, residential units and probably hospital facilities. This will definitely push the gross development value beyond RM1 billion.”

She said the reclamation will take less than two years, but added that BAssets is not in a hurry to complete the development, considering current market conditions. The project will likely be developed in phases over 10 to 15 years.

Coming back to Sultan Ibrahim’s off-market transaction, it is not yet publicly known who the seller of the 6.7% stake is. Tan held a controlling 63% stake in BAssets — 37.7% direct interest and 25.3% deemed interest via Berjaya Corp Bhd — as at Aug 17.

Mercury Securities, the only research house covering BAssets, has a “buy” call on the stock, with a target price of RM1.62. This represents an upside potential of 37%.

By now all have got the News & The Reason Why Johor Sultan is interested in Bj Assets.

Now Calvin has been to Berjaya Waterfront City Twice This Week

These are the Onsite Findings

2) Now let’s imagine walking with Calvin  In the direction of CIQ Kastam from The Zon Hotel of Bj Waterfront City.

After passing the traffic lights on the Right are shophouses (Partly Govt owned) Ha! 7 Eleven is found here. How’s business?

And beside it is the Johor Sultan’s private  harbour.for His Majesty’s Yatchs & Speedboats

And across the road is Vantage Bay (A JV by Peter Lim the Remisier King of Singapore with Son of Johor Sultan. When ready this will be Vantage Bay Hospital with healthcare suites

Ok let’s move on. Soon we arrive at the R&F Development Project! A MASSIVE BLOCKS OF HIGHRISE. Land reclaimed almost reached near 35% to Singapore Iand. Amazing.

Opposite is Menara MSC Cyberport – owned by BJ ASSETS. Inside is K N Kenanga Security Firm.

A little further is Grand Blue Wave Hotel. One Hong Kong Investor saw its potential early & bought over this Hotel & refurbished it. Just in time to catch the Boom. Real smart Honkees!

NOTE: ALMOST 30 YEARS AGO IN KL. ONE FRIEND OF CALVIN OWNED THE BUNGALOW IN JALAN MAAROF, MAIN ROAD IN BANGSAR (FACING MACDONALD) AT THAT TIME BUNGALOW PRICES WERE GOING AT LESS THAN RM2 MILLIONS. BUT THEN ONE BUYER FROM HONG KONG OFFERED HIM RM3 MILLIONS PURE CASH! HE COULDN’T RESIST THE RM3 MILLIONS OFFER. SO HE SOLD IT AND RETIRED.

THIS SMART HONGKEE FORESEE THAT THIS MAIN ROAD FRONTING BUNGALOW HAS COMMERCIAL POTENTIAL & PAID A PREMIUM FOR IT!

And after R&F Development is the CIQ IMMIGRATION & JOHOR CAUSEWAY!!

500,000 Johoreans, Spore PR & Singaporeans cross this busy Bridge to Singapore every morning & evening. This is the busiest land crossings in South East Asia

Now let’s go in and take a look at CIQ Kastam Complex. At the arrivals from Singapore there are shops here.

The reply was a HUGE SURPRISE! We sell Rm50,000 worth of goods everyday!

WOW! Rm50,000 worth of goods a day? Really? AMAZING! ASTOUNDING INDEED! THIS IS 10 TIMES MORE THAN ANY OTHER 7 ELEVEN OUTLET IN MALAYSIA.

Malaysians & Singaporeans who buy here are getting 3 times the purchasing power. So the difference between 7 Eleven in Singapore & 7 Eleven in Johor is only 1/3 of Singapore pricing.

So they just buy up everything without batting an eyelid.

So what you see will get a fast turnover. Almost 50% of the stocks on the selves will be sold and restocked daily. We have 2 teams. One attending to sales. Another moving goods from Store to the Front.

No wonder BJ ASSETS is seeking to reclaim lands here.

Is it said that Lands in Shenzhen bordering nearest to Hong Kong commands the Highest Prices in All of China. So Johor Lands bordering Singapore will also rise and rise in Value!