ASIAOBIO BOSS BUYING SO MUCH NETX OVER ALL OTHERS SHOW GREAT POTENTIAL, Calvin Tan Research

OSK-Vi nurtured several start up companies like Green packet and Mtouche which have emerged as successes over the years.

So is Asiabio. It has bought loss making Ariantec(Netx)  in year 2015 & trying its very best to turn Netx around.

At long last there is light at the end of the tunnel. 2 Very Favourable winds of fortune is now blowing in Netx’s way

1) A RM21.6 Billions for Nationwide Fiberisation for all of Malaysia. Netx already stated in its Annual Report (page 5) that it is a specialist in Digital Infrar Installation

After deduction only a mere Rm56 Billions (Only 19% left) of Rm290 Billions are for developments. And NFCP will take up Rm21.6 Billions (A Whopping 38% Goes into Nationwide Fiber Connectivity Program

Since MCMC Minister Gobind Singh has designated Fiber as a utility – Fibers will now be connected free of charge like water pipes & electricity lines to every home – be it city, town or kampung. The fiber lines are given free (sponsored and paid by Govt like in Singapore) Only charge for usage. This Massive Injection of Capital will Cause A Multi Year Bull run in stocks like Opcom, Redtone, Netx and others (Remember: It was Petronas Rm30 Billions for Upstream Capex that caused a Bull Run in OGSE Stocks. As success begets success now NCFP Stocks’ turn to go into a Bull Run soon)

2) NETX fortunately, has another winning division. Loss making still like Gpacket in early days. Never mind. An increase of e-payment is coming

Trends: Digital payments in Southeast Asia expected to cross US$1 trillion by 2025 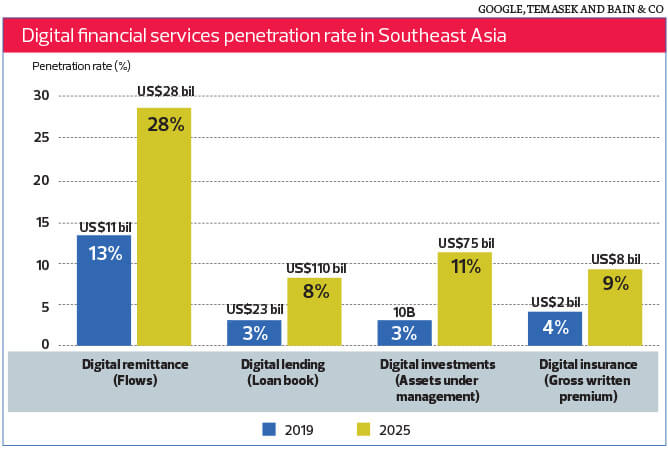 Digital payments are showing double-digit growth in Southeast Asia and are expected to cross the US$1 trillion (RM4.19 trillion) mark by 2025, almost double the US$600 billion this year. Digital is poised to be the payment method of choice for nearly one of every two dollars spent in the region, according to a report jointly published by Google, Temasek and Bain & Co on Oct 3.

Titled e-Conomy SEA 2019, the report says digital payments have reached an inflection point, where adoption and usage levels are surging in line with other internet economy sectors, such as ride-hailing and e-commerce. Digital payments are defined as cashless transactions that include cards, account-to-account transfers and e-wallets.

The five financial services identified in the report as ripe for transformation in the digital era are payments, remittance, lending, investment and insurance. Within the digital payment space, e-wallets are expected to exceed US$114 billion by 2025 — a fivefold growth from just over US$22 billion this year.

“Other financial services are still in a nascent digital stage, but the penetration rate is expected to increase two to threefold over the next five years. For example, digital lending, on track for a US$110 billion loan book by 2025, will be the largest volume contributor, spearheaded by innovations in consumer and small and medium business lending,” says the report.

SO THERE ARE TWIN PRONGED GROWTH STRATEGIES FOR NETX

Question now is. Will NETX Follow the Success of GPacket whose share price has risen to over 70 Sen today? How far and how high will Netx share price be is yet to be seen.

At the time of writing Netx is only 2 sen. See if Netx will reach 8 sen first in One Year’s time. (That will be a very spectacular gain of 300%)

No wonder Asiabio Bosses are investing so much into Netx

See how they bought